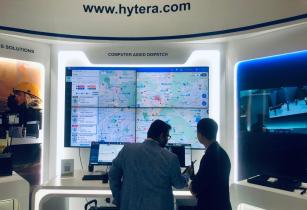 The Hytera system replaces old-fashioned paper documents - and is already making it much easier for citizens to report crime; and for the police and other authorities to process incidents and, ultimately, solve crimes.

Previously people wishing to report a crime either had to visit the municipal government office in person, or make a telephone call. The office clerks then recorded the crime information on paper documents which often became hard to locate and lost occasionally.

The government therefore decided to invest in a digital crime reporting system to increase reporting accuracy, and make it faster and easier to find documents.

The new system provides multiple benefits for improving both the safety of citizens and the efficiency of the police service, including:

- Faster responses to emergency calls and the ability to immediately dispatch police officers to an incident.

- Clear and easy access to documents and reports, including historical cases tracking and management.

- The ability to generate call and incident statistics that help monitor progress; and identify where further improvements can be made.

- The preservation of resources like paper, which helps to protect the environment.

- Reduced costs. The new Hytera digital system is now enabling the Ray Nkonyeni municipality to save hundreds of thousands of rand annually.

Ken Lin, deputy director of Hytera Southern Africa, said, “We are delighted to welcome another African municipal customer to the Hytera family. Through our partnership with Ray Nkonyeni Municipality we are using technology to improve life for both citizens and police employees.”

Selwyn Naidoo, chief manager of the Fire, Rescue & disaster department of Ray Nkonyeni, said,  “We are very happy to use the Hytera Smart Call Taking and Handling System.  It really helps us to improve the efficiency of working internally and dealing with all the incidents from the Municipality. Thank you Hytera.”