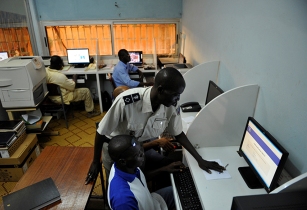 The Africa desk will help shape a regional strategy to drive intelligence-led coordinated actions against cybercriminals and support joint operations.

Cybercrime is one of the most prolific forms of international crime, with damages set to cost the global economy US$10.5 trillion annually by 2025, according to Cybersecurity Ventures.

“Our aim should be to create a cyberspace that is free, open, peaceful and secure, which benefits all countries and all people.

“We want to see international law respected in cyberspace, just like anywhere else. And we need to show how the rules apply to these changes in technology, the changes in threats, and the systemic attempts to render the internet a lawless space.”

“The UK’s support for INTERPOL’s cyber initiative in Africa underlines its commitment to this fight and will be an important piece of the global security architecture to combat cybercrime.”

The creation of INTERPOL’s new cybercrime desk comes at a time when cybercriminals are attacking the computer networks and systems of individuals, businesses and global organisations when cyber defences might be more vulnerable due to the shift of focus to the pandemic crisis.

The project is expected to provide opportunities to take regular pulse checks on cybercrime in Africa and to publish annual threat landscape assessments that will underpin operational activities.

With UK funding for the two-year initiative amounting to almost US$4.23mn, the Africa cybercrime initiative will be implemented by the Cybercrime Directorate at the INTERPOL Global Complex for Innovation in Singapore.