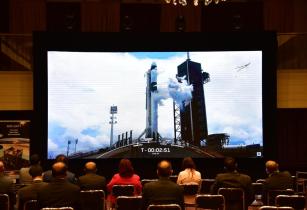 The spacecraft travelled for 26 hours before reaching the ISS, after it had taken off from from NASA’s Kennedy Space Centre, in Florida, the USA, on 3 June at 17:29 UTC (21:29 Mauritian time - GMT+4).

The Mauritian nanosatellite will be sent into low earth orbit from the space station by 22 June.

This is a historic move for Mauritius which envisions to engage in the spheres of space and satellite technology as part of its national development agenda.

The minister of information technology, communication and innovation Deepak Balgobin and other dignitaries watched the SpaceX-CRS22 Cargo Dragon rocket live take off from the Government House in Port Louis. Among those present, members of the Board of Directors of the Mauritius Research and Innovation Council (MRIC), the Government agency which is operating the pioneering nanosatellite project in Mauritius.

According to minister Deepak Balgobin, “After two years of hard work, the nanosatellite has now reached the ISS. This springboard to space opens up new opportunities and initiatives for our country through space and satellite technology and gives new impetus to our socio-economic development. Mauritius made a first big step into space science and technology. This is a momentous achievement and reflects the vision of the Prime Minister, Pravind Jugnauth, of a knowledge-based economy.”

“Even if the satellite is small in size, just like our island, today’s launch indicates that the giant leap has been successful and poses Mauritius high in the sky.”

The MRIC has set up a ground station at its premises in Ebène to receive data from low-orbiting MIR-SAT 1. The data will be used for various purposes, including maritime surveillance of Mauritius’ vast exclusive economic zone, climate change adaptation, weather forecasting and road traffic management.