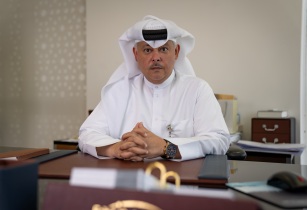 Speaking with Communications Africa, Hamad AI Mannai, vice-president of Es'hailSat, spoke about the challenges, low-cost broadband technology and it's onging or upcoming projects in the Middle East and North Africa (MENA) region

1. How Es'hailSat is boosting broadcasting, broadband delivery and global connectivity in MENA and beyond?

Es’hailSat owns and operates two purpose build satellites Es’hail-1 and Es’hail-2 located at 25.5/26E broadcast orbital hotslot. These satellites are strategically located and offer excellent coverage over MENA and Central Asia region. Equipped with Ku and Ka-band transponders, the capacity is well suited and used for broadcasting such as DTH and video contribution, as well as VSAT services offering broadband to end users for government and enterprise applications. On the ground segment, Es’hailSat owns a state-of-the-art teleport in Qatar providing services such as uplink and downlink services, co-location, and other value-added services to enhance broadcast and broadband delivery over satellite. In addition, the teleport is also well connected via fiber to international point of presence (PoP) through local service providers.

2. What are challenges faced in the MENA region?

MENA is a very diverse region and predominantly a free-to-air market. Over the years there have been steady uptick in Pay TV subscription however with the continued threat from piracy of content across the region, the Pay TV subscription has been heavily impacted and resulted in revenue losses for broadcasters.

On the data aspect, there is lack of public-private partnership across the region to have a comprehensive approach in tackling low penetration of internet in underserved areas. We believe satellite broadband is one of the best ways to tackle such issue due to its wide coverage and ease of deployment to hard to access areas within the coverage.

3. How is low-cost broadband technology getting a pace in this region?

At this moment broadband cost remains high in the region. This is partly due to lack of competition among Internet service providers as well as the inherently high cost of the satellite equipment. Es’hailSat believe low-cost broadband will gain pace under a more competitive ISP market which helps to reduce the per Mbps cost. On the other hand, government plays an important role in enabling low-cost broadband particularly with investments and policies, as holistic broadband plan on national level will help to increase effectiveness of deployment across the country. The selection of technology fit and creative combination of terrestrial and satellite technology such as Community WIFI powered by VSAT will help to ensure lower cost per subscriber. Lastly collaboration on sharing infrastructure with several providers in same area will help to lower broadband cost through sharing of CAPEX investment and reducing over-provisioning.

4. Can you tell us about your ongoing and upcoming projects in MENA? How cost-effective are they?

Customer is always first in Es’hailSat’s priorities. Given the uncertain sentiment in market particularly for broadcast segment, there have been a slowdown in terms of new channel launch. Es’hailSat has been exploring and looking into expanding additional value-adds services such as playout to help our broadcast customer grow and expand in the market. With the additional value-add services, it will help customers to convert from CAPEX intensive investment into a more gradual monthly OPEX model. On VSAT segment, Es’hailSat has always been in constant engagement with international and regional manufacturers to ensure best value for customer in term of cost and performance.